Make Halloween Scary for Yourself, Not Your Pets 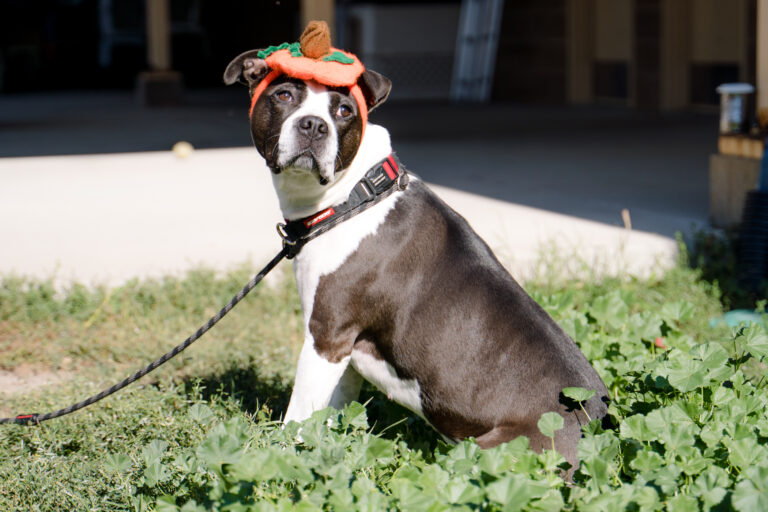 A large, fluffy Pyrenees dressed in a princess costume, crown, and all. A house cat dressed up as a mighty lion.

We get it—your companion animals look adorable in costumes, and Halloween is the perfect excuse to dress them up. However, before you start brainstorming an ensemble, consider it from your pet’s perspective. From a festive bandana to a full-on costume with accessories, here’s how to make sure your furry friends enjoy dressing up on October 31 as much as you do.

At Better Together Animal Alliance, we encourage everyone to think about their animals’ physical and emotional well-being, especially when costumes are concerned. Considering this holistic picture during any interaction or handling is something that experts, including animal shelter staff and veterinarians, have increasingly espoused over the years.

First, consider your pet’s behavior. Does your dog chew anything she can get her mouth on? If so, it’s probably safe to bet that even something small, like that pumpkin bandana, won’t be a good fit for her. Does your cat refuse to wear even a regular collar? He probably won’t be a good candidate to dress up at all.

We should also try to limit our pets’ anxiety and fear. That seems like a given for a dog or cat you love, but sometimes we might not realize we’re causing our companions stress, because they communicate with us in a different language. Dressing them up in costumes can definitely fall into that category.

There are some common body language signs that indicate stress that many people aren’t aware of. For example, dogs yawning can be a sign of stress, not sleepiness. The same goes for lip licking—it can indicate anxiety, not that your canine friend wants a piece of your dinner. Scratching themselves can fall into the same category. If a dog’s eyes are wide and exposing the whites of her eyes, that’s also a sign of fear, as is cowering or hunching down. Any tenseness or tail-tucking means a dog is not a fan of whatever is going on.

Your cat may be irritated or stressed if her tail is moving back and forth, her pupils are dilated or her ears are to the side. These are all signs that you should stop interacting with her.

Now that you’ve considered your pet’s emotional well-being, you should consider some general safety guidelines. Keep an eye out for any small parts to the outfit that your dog or cat could chew and accidentally swallow. Make sure the costume fits well—that it is not tight enough to limit movement or breathing, but not so loose that an animal can get caught on something and become injured.

Go slowly when putting any clothing on, and give your pet treats while you’re doing it! If your animal displays any of the behaviors mentioned above or if they are generally squirming or struggling to get out of the outfit, stop putting it on. Finally, supervise your pet whenever they’re in costume.

Whatever your dogs and cats end up wearing this Halloween, you can know that you made the best decision for them. After all, we might like scary things this spooky season, but your pets definitely do not.

Learn more on our Resources page.