The Importance of the Human-Animal Bond 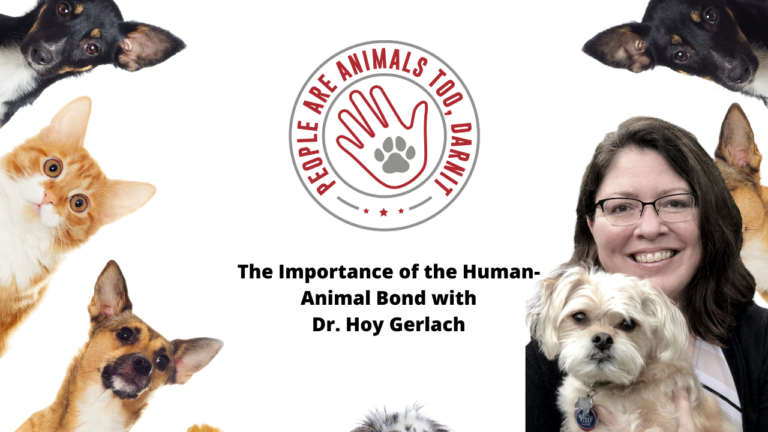 Society is starting to recognize the many ways animals help us

When social worker Dr. Janet Hoy-Gerlach was doing crisis counseling and risk assessment a couple of decades ago, she would ask people who were suicidal why they didn’t act on their thoughts. One unexpected answer came up often enough that it stuck out to her: They didn’t want to leave their pet.

She hadn’t heard of animals being a “protective factor” at all during her education or training, she said.

“Yet, over and over, there I was, hearing there were people out there who were literally still alive because of the bond with their pets. It’s literally a lifeline for them,” she said.

In 2017, Hoy-Gerlach published a book, Human-Animal Interaction: A Social Work Guide, calling on social workers to be responsive to clients who have pets, because for so many people those animals are vital. A big part of her career focus is working with human health and service organizations to understand why the human-animal bond is important and how to be responsive to that.

“This isn’t a niche thing or a fringe thing—this is most people that human health and services providers are going to be working with,” she said.

Better Together Animal Alliance Executive Director Mandy Evans hosted Hoy-Gerlach on her podcast “People Are Animals Too, Darnit!” to talk about the importance of the human-animal bond.

The Ways Animals Help Us

Companion animals, particularly the ones who have co-evolved with us, like dogs and cats, connect with us wonderfully, and provide social, physical, emotional and psychological benefits, she added.

Socially, animals are companions for us.

“In some of the research I’ve done, particularly people who struggle with isolation…will talk about having someone to come home to, feeling needed, unconditional support,” said Hoy-Gerlach.

Plus, they connect us with other people who also appreciate animals, she said.

For example, look at people who meet each other at dog parks or who only get to know neighbors because they see their cat in the window or their dog out for a walk.

Physically, animals keep us active, whether walking the dog or cleaning the litter box, and they give us a routine.

“They help keep us on a schedule and structure, which is helpful for us,” said Hoy-Gerlach.

From an emotional and psychological standpoint, animals are affectionate and responsive and give us purpose.

“They’re not going to say ‘I love you’ with human words, but they are going to convey to us excitement at our presence,” said Hoy-Gerlach. “It’s unconditional … They can go places in our lives that we probably wouldn’t want other humans to go.”

They increase levels of our oxytocin, which is the feel-good hormone released when we’re with people or other species we bond with. It lowers our heart rate, respiration rate and blood pressure, which is always good, but particularly beneficial if we’re stressed.

“Our animals’ presence can help us downregulate into the calmer place,” she added. “So we have this profound reaction to them.”

Many animal shelters are now recognizing the importance of the human-animal bond. Instead of thinking that people don’t deserve pets, which has historically been the attitude, they are focusing on programs that help keep animals and humans together.

They’re not the only ones that have a new respect for the human-animal bond. Across the board, in various facets of society, it’s clear that we are valuing our pets more and more.

Millennials are very embracing of their roles as a “pet parent.” Wanting space for a dog has driven their house purchases, and now dog parks are viewed as amenities in communities trying to lure in young people for the job market, she added.

The value of the human-animal bond is also evident in legal proceedings. In general, animals have the legal status of property, and traditionally, if a couple gets divorced, animals are treated as part of the property that gets divided up.

“Increasingly, this has been treated more like custody,” said Hoy-Gerlach.

While this brings up a slew of other questions, the point is that the property status of animals is not adequate.

“There are countries that are moving animals into the legal status of sentient beings,” she added. “I anticipate we’re going to be seeing more of that.”

In fact, Ohio is considering a bill, which has bipartisan support, that would set up stronger cross-reporting between animal services providers and human health and service providers, requiring social workers to report cruelty to animals and giving them immunity for doing so. Other states already have similar laws or are considering them.

Hoy-Gerlach is involved in an emotional support animal placement program called Hope and Recovery Pet (HARP) program. It’s a collaboration between a local humane society and a regional human healthcare system. Shelter animals are placed with people living with mental health conditions, at risk of being in social isolation.

So far, there’s only initial research and a pilot study. But initially, the findings show that depression, anxiety and loneliness went down in people with animals.

“In interviews, they specifically said they felt it was the animals that made the difference for them in terms of their mental health and well-being,” said Hoy-Gerlach.

Overall, Hoy-Gerlach says that the benefits we get from animals are going “to be a powerful way the human-animal bond gets more respect.”